The pieces stand out for their contemporary straight lines and imposing presence. Current, following the world trend of the great masters, the furniture stands out for its noble and innovative materials, composing sophisticated and exclusive environments.

SEE PRODUCT
Secondhand steals include everything...
...from a white carved mantel and twin vanities to a pair of bar stools and an ebonized dining table. Like many during the pandemic, newlyweds Anthony and Chelsea Campagni marked 2020 as the right time to abandon city life in Chicago in favor of the picturesque North Shore suburbs. The couple had been sharing Anthony's condo in the Wicker Park neighborhood of the Windy City before eloping in Wyoming during the height of COVID-19—and then found out they had their first baby on the way. 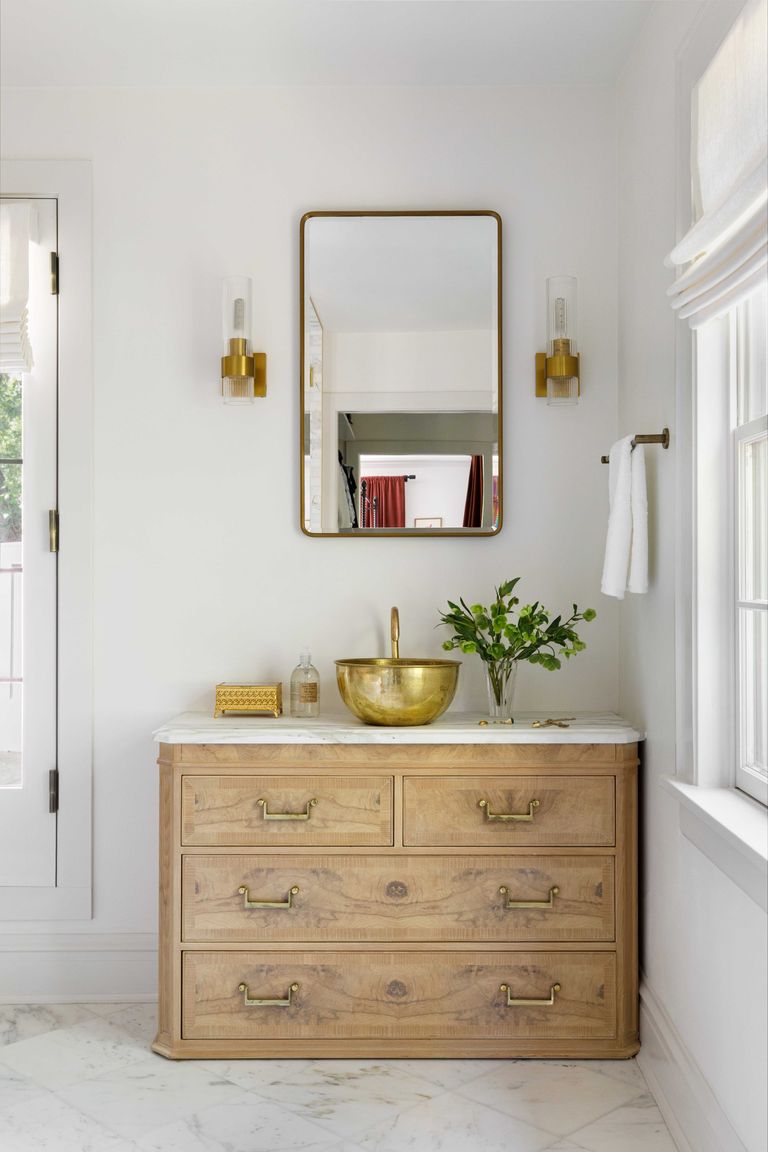 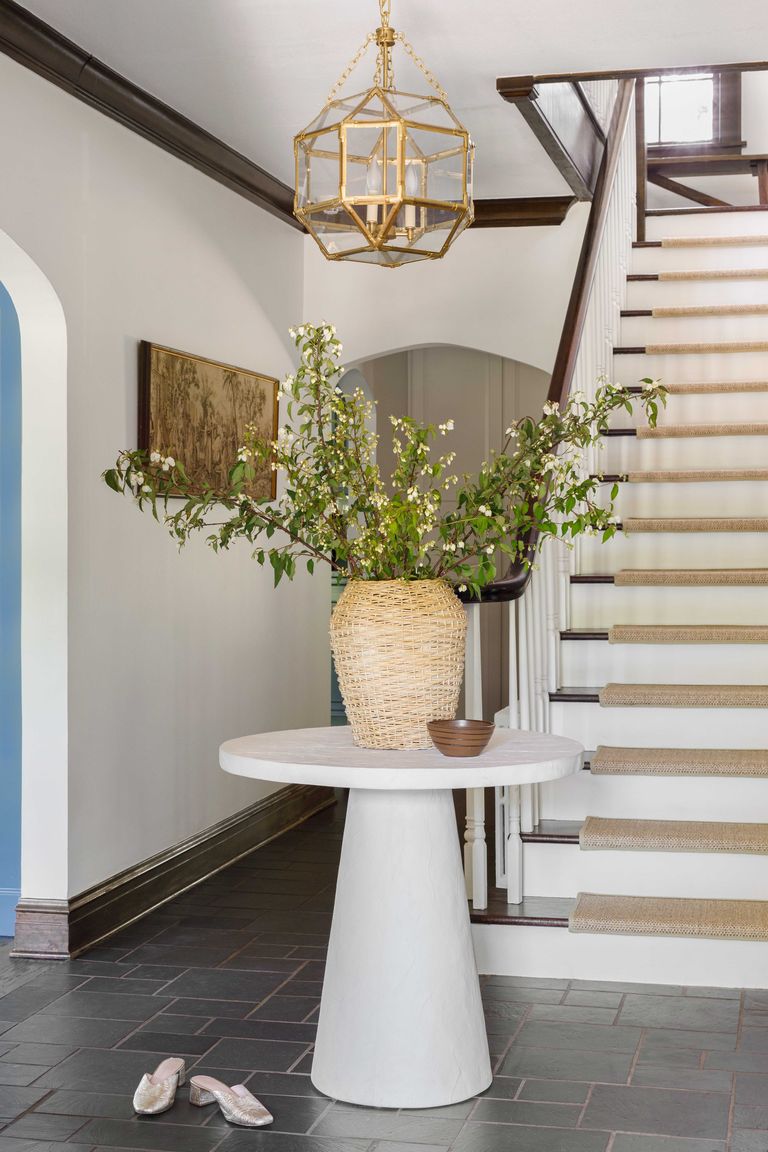 They then called upon Chicago-based
“I had never designed a Tudor-style home before and was a bit intimidated, so I went straight to my design books for inspiration,” says Turner. “I wanted to pay homage to the original architecture and details but bring the home into 2021 with elements like bold color, pattern, marble, brass and more.” Dated and in rough shape, the house needed a top-to-bottom refresh. Turner and her team refinished all the flooring, gutted most of the second floor to create a dreamy primary suite for the parents-to-be, painted the existing cabinetry in the kitchen, and added new hardware, countertops, lighting, fixtures, and a backsplash. She also installed beams in the living room to match those in the kitchen and knocked down a brick wall between the living and sunrooms (the latter of which had been added-on by a former owner) to create flow between the two spaces.
“I had never designed a Tudor-style home before and was a bit intimidated...
“We wanted to lacquer the entire sunroom to make it feel like less of an addition, so we plastered over the brick and added drywall,” says Turner. “Those gorgeous windows are original, though. Aesthetically, it’s my favorite part of the house. It definitely has that wow-factor.” For the interiors, Turner layered in moody hues, soft and inviting textures, durable fabrics that will withstand inevitable baby spills, and living finishes, like unlacquered brass, that’ll only get better with age. Turner finished the three-bedroom, two-and-a-half-bathroom home in February 2021, and the couple moved in just two days before welcoming their son. “Talk about good timing!” jokes Turner. “Ultimately, they wanted a home that would be livable, beautiful and not boring, and I think we accomplished that.” Take a tour of the entire house below. 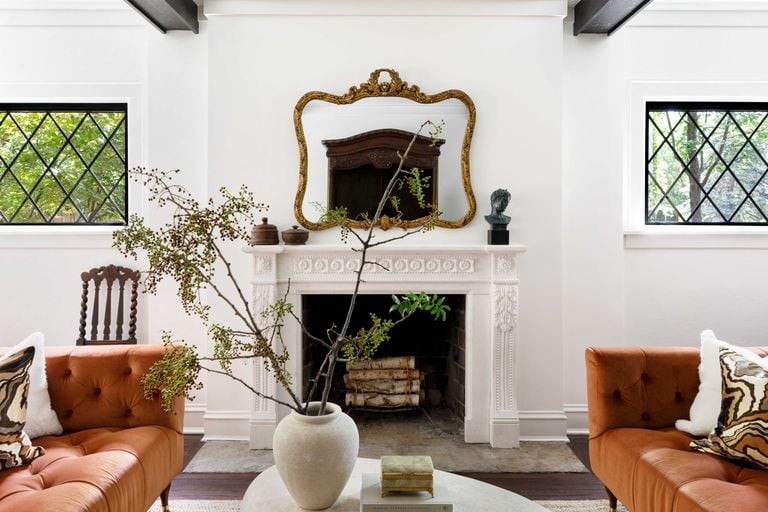 Sunroom
“Chelsea loved the idea of checkboard floors, and Anthony did not,” laughs Turner. “Chelsea made a deal with him that she could have the floors in the sunroom, and he could put his foot down somewhere else.” Turner used a honed Carrara marble to tone down the look and then juxtaposed the material with organic elements, like a slouchy Crate & Barrel sofa, black wood Four Hands accent table and velvet upholstery that ensure it doesn’t read “like a parlor in a mansion from the 1800s.” A pair of matching brass floor lamps were a $50 Craigslist find. The Benjamin Moore Alligator Alley lacquered walls play well with the backdrop of mature landscaping outdoors. 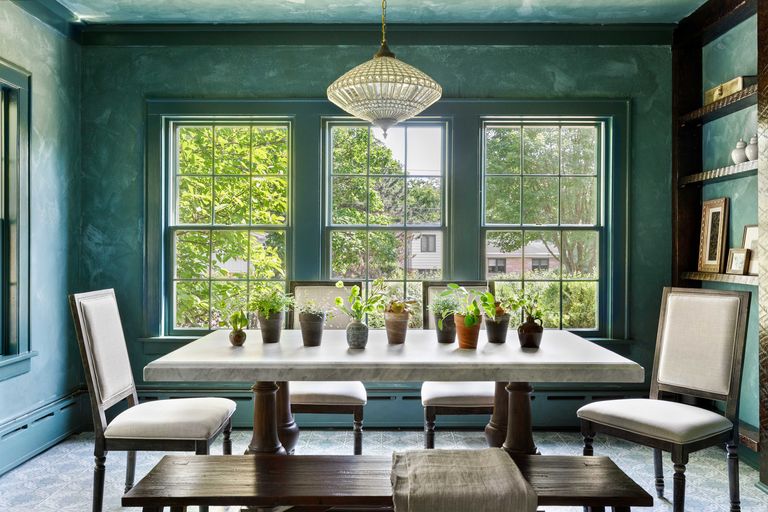 Living Room
The living room fireplace originally had a surround that looked “straight from Stonehenge.” Turner replaced the oversize boulders with a white carved mantel she found on Facebook Marketplace for $1,000. “It was a steal,” she says. “But it was literally in someone’s home, so we had to have it ripped out.” The mirror was another Facebook Marketplace find—for $200!—and Turner also added sofas from Interior Define, pillows from CB2, spindle chairs from Salvage One, and a durable jute rug from Rugs USA. She coated the walls in Benjamin Moore White Dove.
This article
https://www.housebeautiful.com/design-inspiration/house-tours/a37851795/caroline-turner-north-shore-chicago-tudor-home/
SEE ALL ARTICLES Inside a playful, bohemian beach house on Martha's Vineyard

I would follow Jessica to the end of the Earth,” Johanna Hynes says, referring to her designer, Jessica Stambaugh. The Nashville-based principal of JS Interiors designed Hynes’ Boston wellness studio, Asana Charlestown, her family’s townhouse—and most recently, their beach chalet in Katama on Martha’s Vineyard.
READ ARTICLE Making a modern home that's both kid-friendly and beautiful is no simple task. But for one family of six in Austin, Texas, it was crucial. So they enlisted designer Andrew Howard to turn the modern home into a cozy space everyone can enjoy. At around 10,000 square feet, the five-bedroom, seven-bathroom home needed both cosmetic changes and structural tweaks.
READ ARTICLE From a white carved mantel and twin vanities to a pair of bar stools and an ebonized dining table. Like many during the pandemic, newlyweds Anthony and Chelsea Campagni marked 2020 as the right time to abandon city life in Chicago in favor of the picturesque North Shore suburbs. The couple had been sharing Anthony's condo in the Wicker Park neighborhood.
READ ARTICLE

BE PART OF OUR CLUB FOR DISCOUNT